Section of the Giara Horse

The history, video and photos of the Cavallino della Giara

The Giara horse is undoubtedly one of Sardinia’s most well-known wild animals. It is not a pony, despite its low height at the withers, but a real horse with a small build. Over the course of time, the hostile and uncontaminated environment of the Giara has selected ungraceful, hardy and skittish animals, with a proud personality and indomitable spirit.

The Origins of the Giara Horse

The discovery of the fossils of Atalonodon monterini and Lophiodon sardus* dating from the Eocene epoch (55.8-33.9 million years ago), both unearthed in the marlstone of Terras de Collu (Gonnesa), does not provide strong enough scientific evidence to confirm that the Giara horse is a regional endemism. Furthermore, the fossils of the horse, excavated in a cave stratum datable to the Neolithic (in Grotta Filiestru), are considered intrusive, and would therefore indicate the first trace of the horse in Sardinia as the bronze statuette of the Arciere saettante in piedi sul dorso del cavallo (‘shooting bowman standing on horseback’ – Salìu, Sulcis – CA). The first examples of documentary evidence are, however, much more recent. In 1540, Sigismondo Arquer states that in Sardinia there is ‘a large number of horses of which many are wild and without a master’. He describes them as strong, agile and beautiful. Many further descriptions follow by authors such as Fara, Alberti, Marmol, Martin Carillo, del Cetti, and Lamarmora among others. That said, it is clear that the origins of the Giara horse and its presence on the plateau are somewhat debatable. However, over recent years, further data on this topic has been gathered thanks to studies by important researchers and to the work carried out by the Ente Regionale dell’Incremento Ippico (Regional Horse-breeding Agency). L. Gratani writes of a connection ‘perhaps with greater veracity to the Barb than to the Arab’, just as Manunta and Cancedda strongly challenge a potential Mongol lineage, being more inclined towards the likelihood of an Aryan descent of the species.

* Fam. Lophiodontidae (related to Tapiridae) and distant relatives of the horse, tapir and rhinoceros

Life and Habitat of the Giara Horse

As far back as can be remembered, the Giara horse has lived wild on the Giara plateau, only being taken into town by its respective owners to be used for threshing during the spring. Strong winds, extreme temperature ranges and very short periods of snowfall are all factors that have contributed in making the Giara a habitat that has hardened the animal over time. In the past, even water, now available throughout the year in special drinking troughs, could only be found in is mitzas (natural springs) or in Is Paulis (shallow pools of water), which used to dry up with the arrival of the summer heat. An interesting study carried out by Professor Cancedda from 1972-1981 describes the organisation and behaviour of the horses on the plateau. It identifies a population of 712 horses, of which 587 (82.4%) form 48 ‘harems’ or family units, comprising one stallion and females with their foals. It describes 45 of these harems as being made up of a maximum of 16 and a minimum of 8 horses, as non-territorial, moving like closed rings and living in the same territory whilst rarely meeting each other. 79 males without harems live outside the droves, subdivided in small groups of a maximum of 4 members or living alone. 46 young females live isolated temporarily, or form pairs among themselves. The remaining 3 groups are territorial and graze over a vast territory, barely crossing each other’s paths.

The Museum features in-depth texts, images and interesting documents on the origins and life of this fascinating animal.

When the Giara's horse was branded on fire 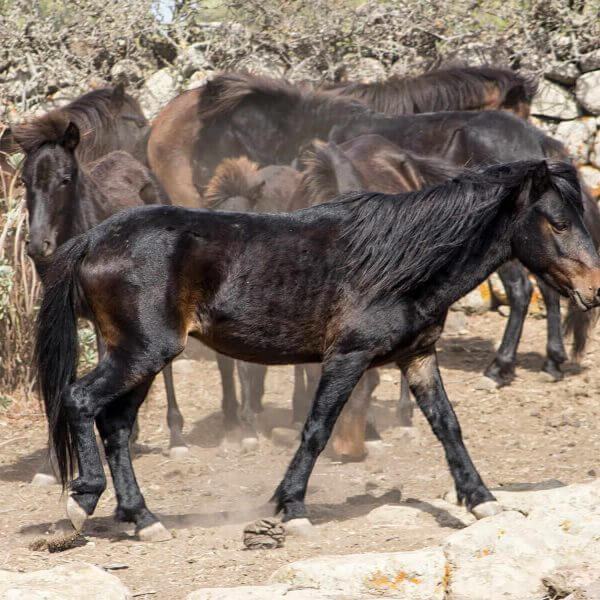 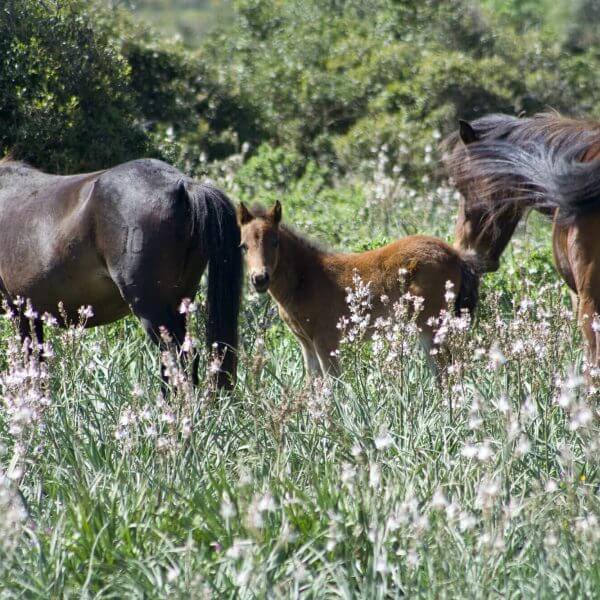 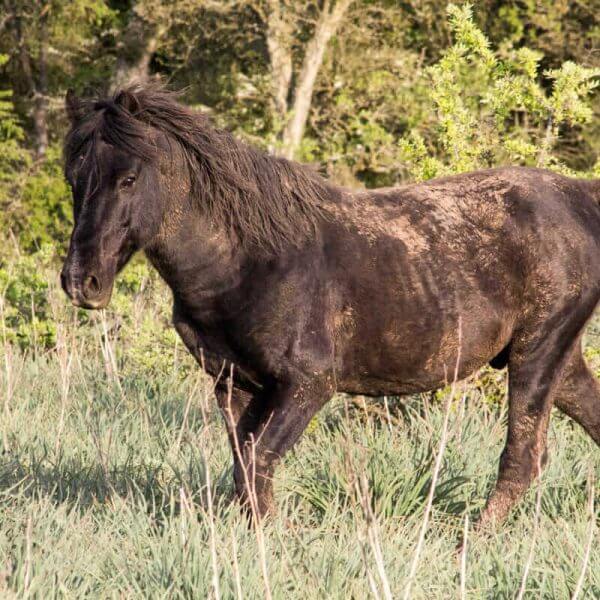 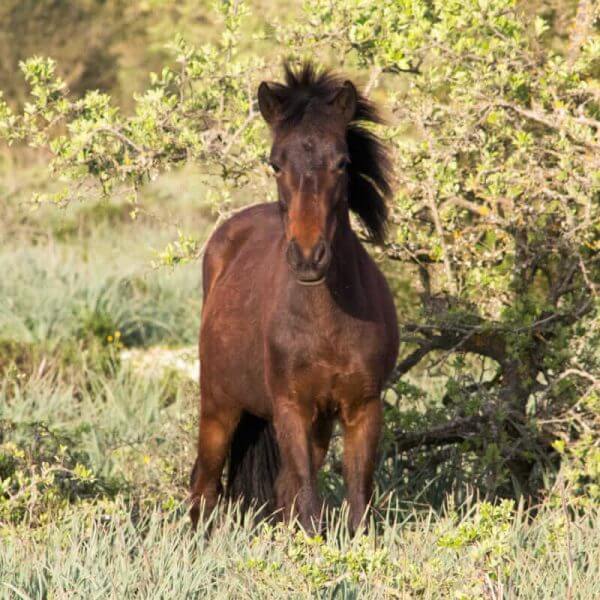 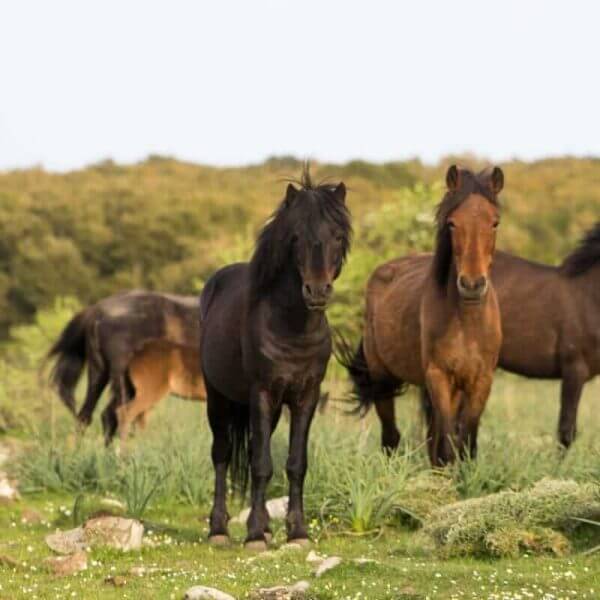 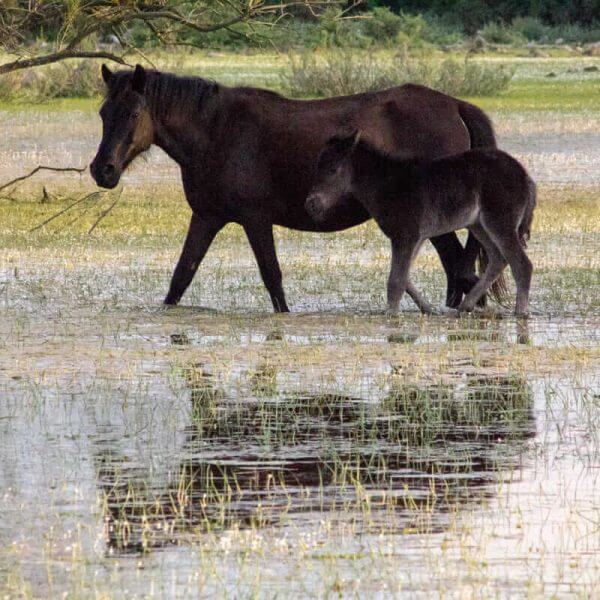 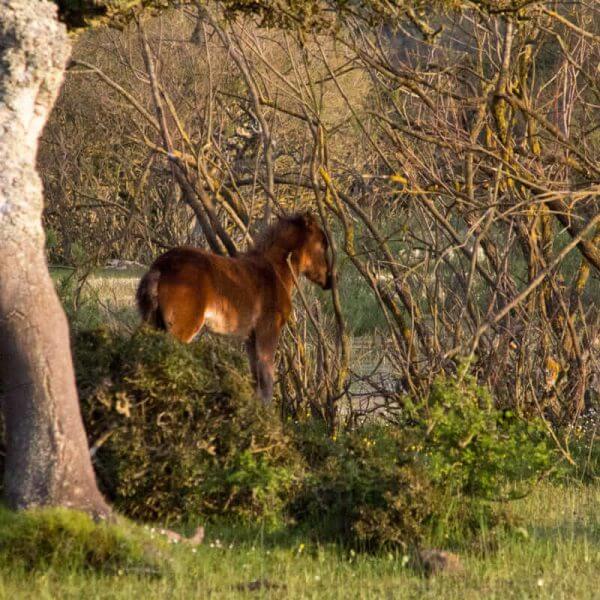 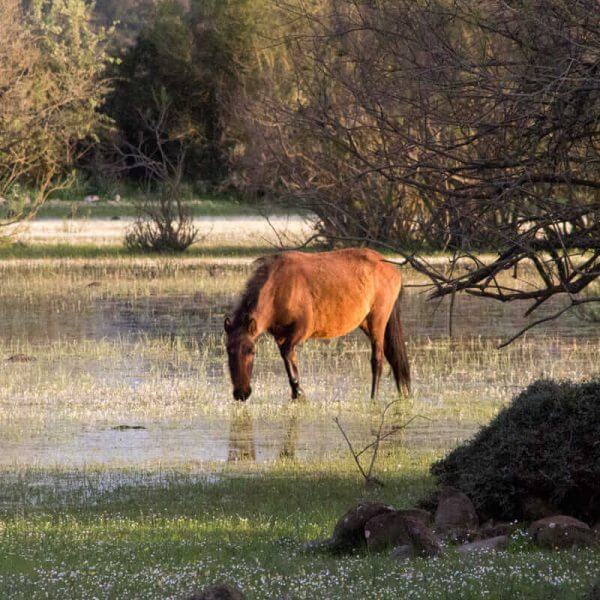 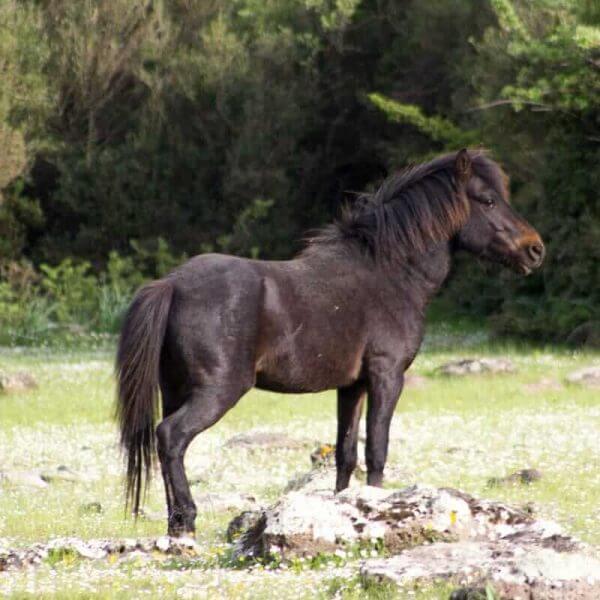 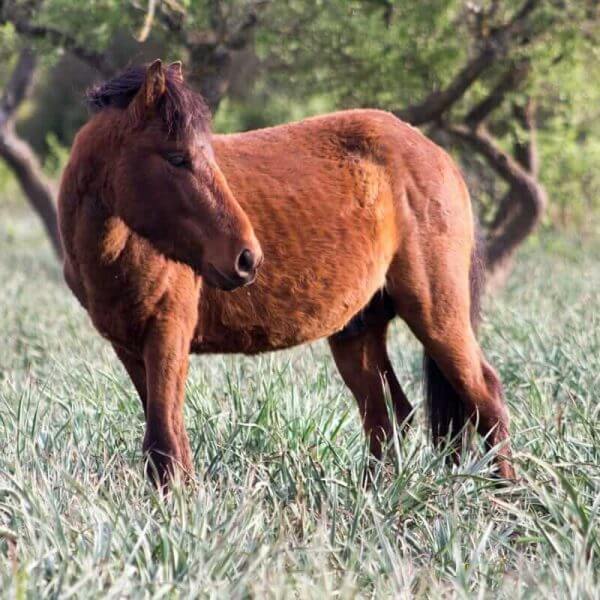 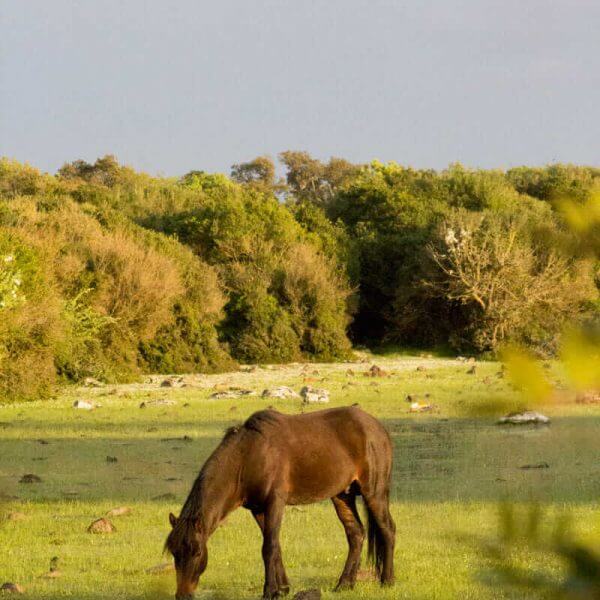 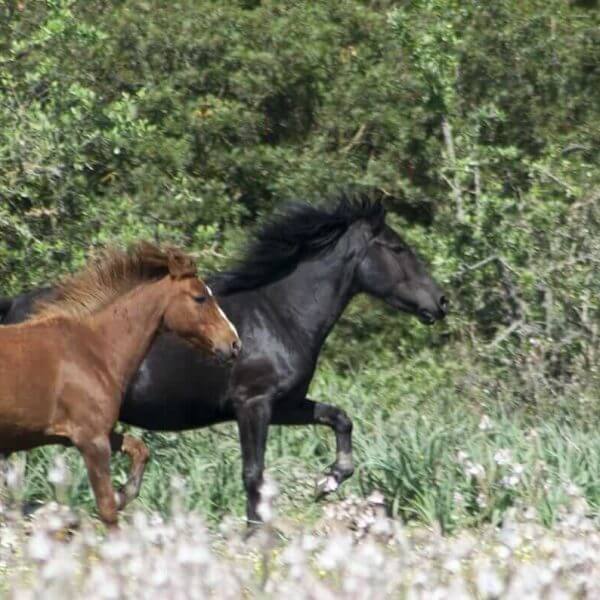 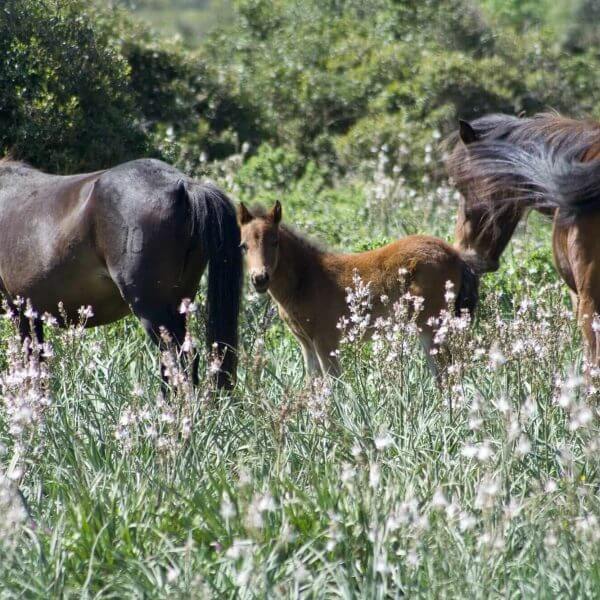 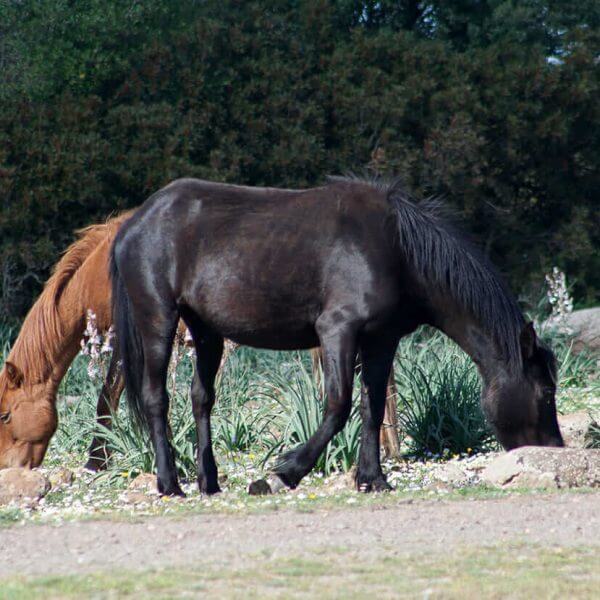 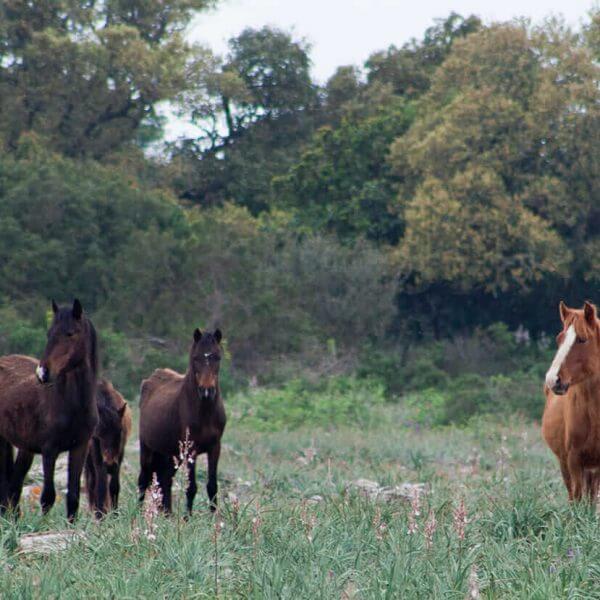 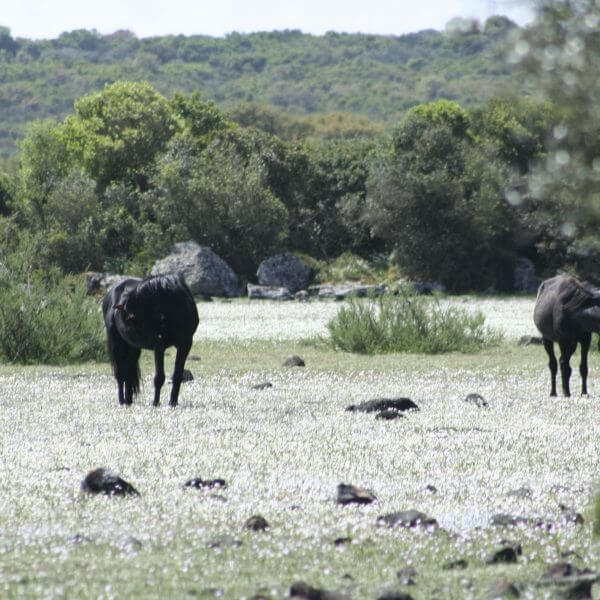 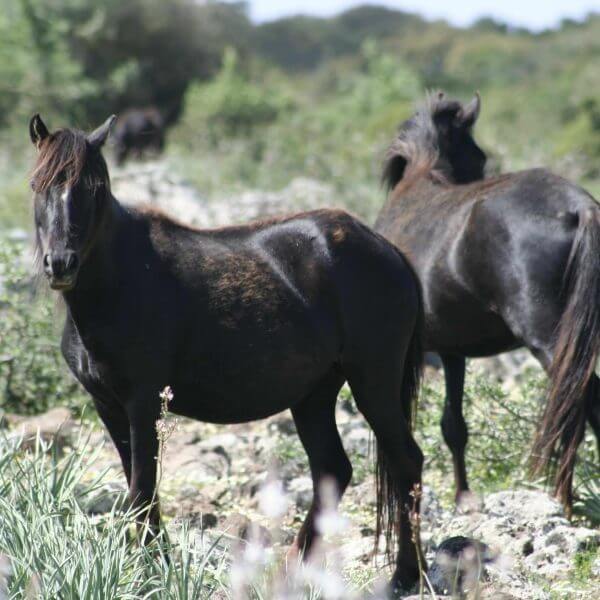 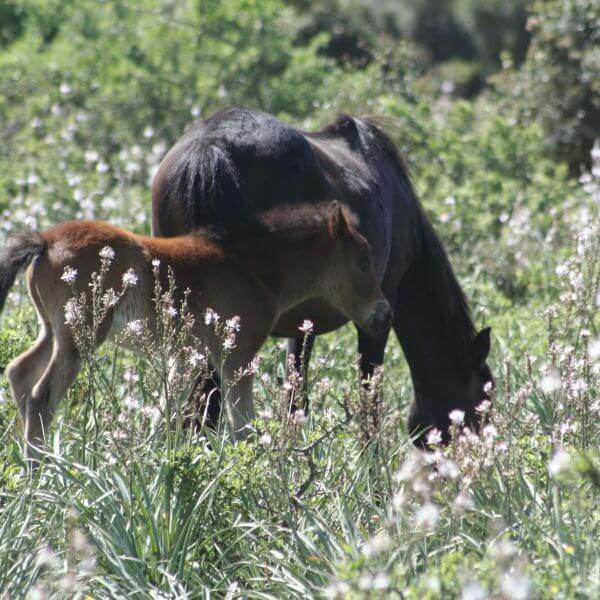